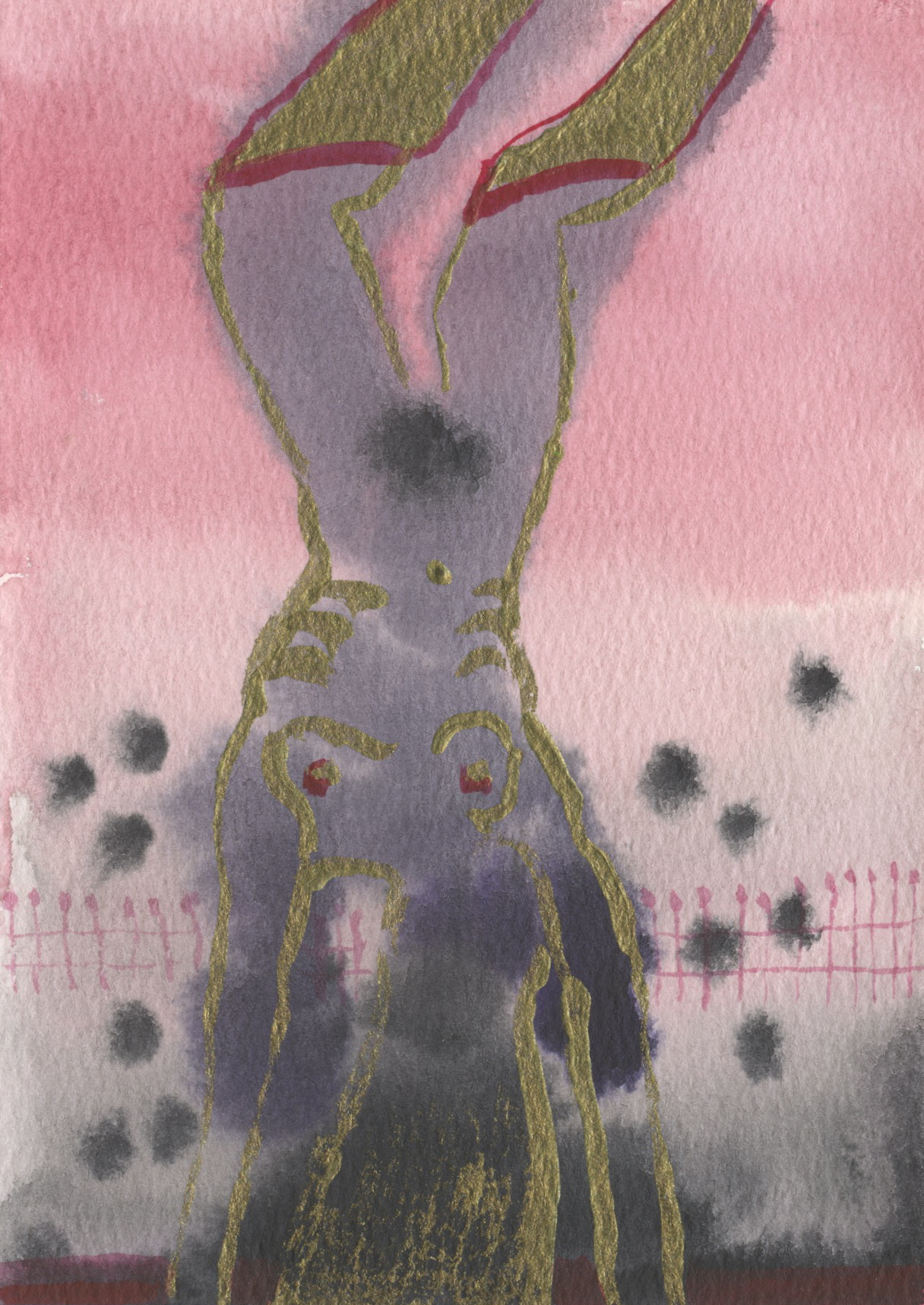 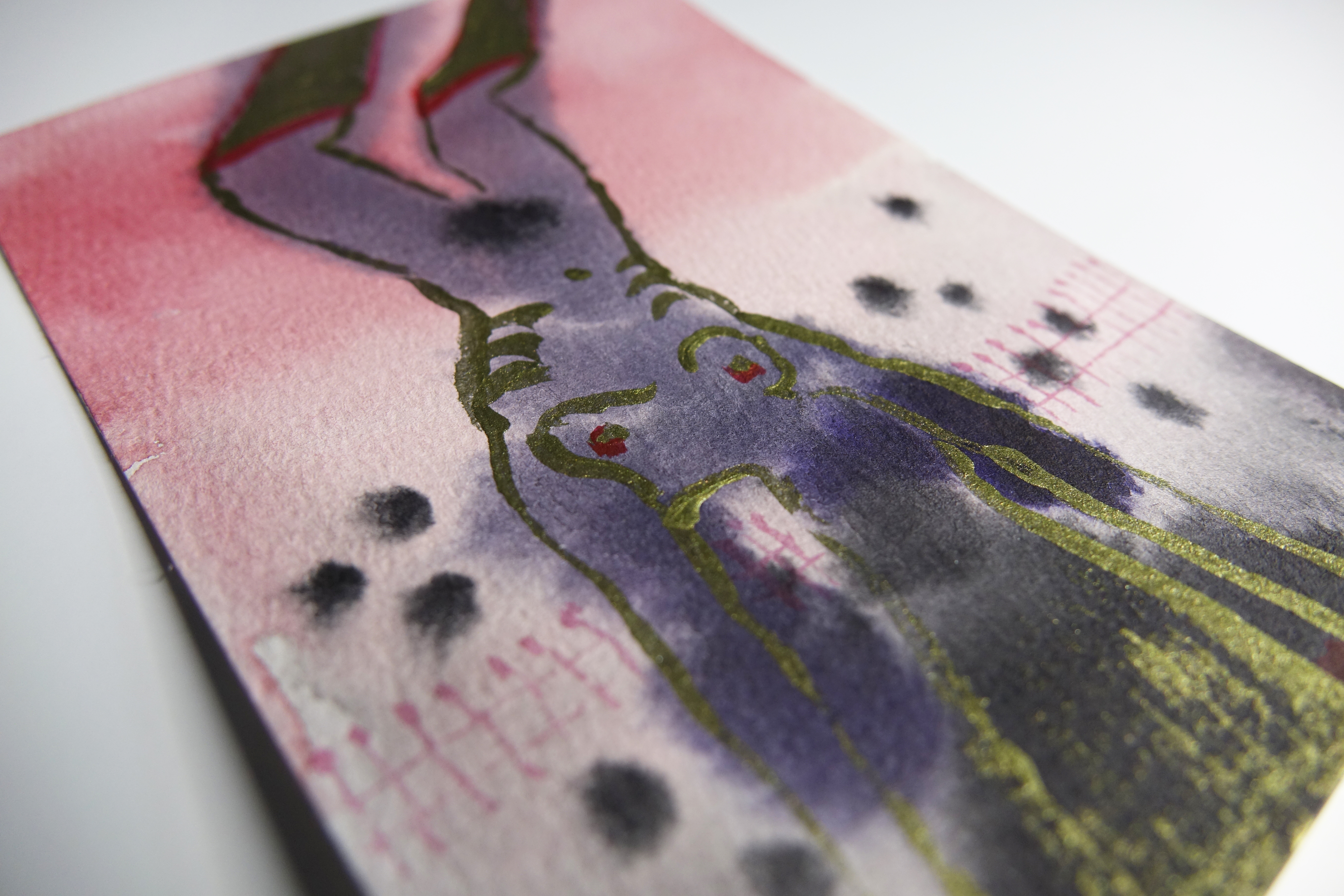 Angela Maasalu (1990) is a painter whose work focuses on personal and intimate themes. She is interested in contradictory human experiences, simultaneously recognising happiness and sadness, the drama and comedy of life. She often uses autobiographic elements to tell stories, combining them with symbolic and poetic imagery in order to expand her personal experience to a more widely understood level. Her work is metaphorical, fairytale-like and relies on narrative beyond the image.

Maasalu begun working with personal and everyday topics during her Master’s studies and after graduating she has often explored the daily life of her generation. She focuses on themes like socialising, relationships, personal space and home. In 2016 Maasalu presented her solo exhibition “Home” at The Back Room project space in London and in 2017 followed it up with “Kodu II” (Home II) at Vaal Gallery. During the performative exhibition project Maasalu continued examining the various meanings of home, building a house in the gallery space and relating that to the institutional white cube. Highlighting oppositions like a home that’s secure and a home that’s made dangerous by close relationships, public and private space, and goals and real opportunities, Maasalu contemplated ways to make oneself heard in the context of contemporary art. She addressed the notion of security and the meaning of home also with her solo exhibition “Clytemnestra never loved you” (2016) at the DA Gallery in Greece. At the group show “Metaphors for a home” (2018) at Tartu Art Museum Maasalu looked at themes like homelessness, community and constantly being on the road.

In 2019 Maasalu presented the show “Throbwerk” (with Kate Lyddon, curated by Tamara Luuk), focusing on the meanings and functions of female bodies. Maasalu introduced expressive and emotional paintings and drawings that made visible the relationship between physical and emotional pain, love and hate, humiliation and shame, and desires and suffering. She broke the art historical codes of depicting women and violently brought to light how the (market) value of the female body as an object of consumption decreases in time.

At the end of 2019 Maasalu opened her solo exhibition at Hobusepea gallery titled “Cave for forgotten dreams”, centred on the image of the cave as storage for memories and dreams. This exhibition confirmed the artist’s interest in text and demonstrated its influence on her work. In parallel to paintings Maasalu presented fairytale-like texts and allegories.

The submitted works for AOAP are similarly to my other works on paper somewhat more playful and humorous than my works on canvas. I use a lot of symbolism - both imagery wise as well as the titles. “The World’s Strongest Woman” is joke on societies perception of women - physical strength usually isn’t a characteristic attributed to women - but that’s not true at all, that we can’t be as capable as men on that front. Having had to do physical labour amongst men before, I found it a funny thought - a perfect woman - strong both physically and mentally, doing manual as well as emotional labour and thus exceeding men in many ways.
The other two are smaller versions of works I’ve made before - one “Invisible Knight” is homage to Italo Calvino short story with same name. The drawing with the bed is based on larger work I did under name “Enemy Never Sleeps” - the male lion representing the obvious - this work is about female vulnerability.