From the first smudged paintings on the side of a cave wall to the great Renaissance masterpieces hidden with complex symbolism, the visual arts have always played a significant role in documenting and critiquing the events around us.

It was with this in mind, that for our final auction of the year (The Christmas Auction), we asked a group of eight talented artists to share with us their reflections on 2019. Each artist was free to pick an event or topic of their liking and represent it in their own style.

From climate activists and equality champions to Brexit arguments and vegan sausage rolls, the results are beautiful and with imagery as varied as their subject matter.

We hope you enjoy this brief reflection on the last 12 months as much as we do. 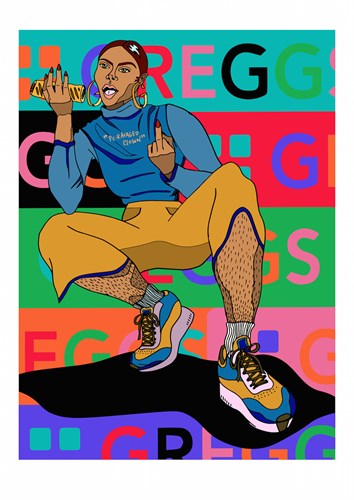 Signed and numbered
Giclée Print on Hahnemule Photo Rag Paper.
42 x 46 cm.
Created in November 2019
This print is 1 of 3 in a limited edition of 3.
This artwork, by the award winning Glasgow School of Art graduate Molly Hankinson, is in Gregg’s introduction of their new Vegan Sausage Roll in January of this year, coupled with the widely publicised reaction of television ‘personality’, Piers Morgan, whose vitriolic outburst toward the new baked good naturally helped ensure that its launch was a complete success.
Piers Morgan's outburst on TV show Good Morning Britain (see video here) after tasting the vegan pastry sparked a heated twitter war and angry backlash from vegan lovers all over the world.
Created using a combination of hand-drawn and then digital illustration techniques, this work exists solely as a giclée print as its original and only medium. 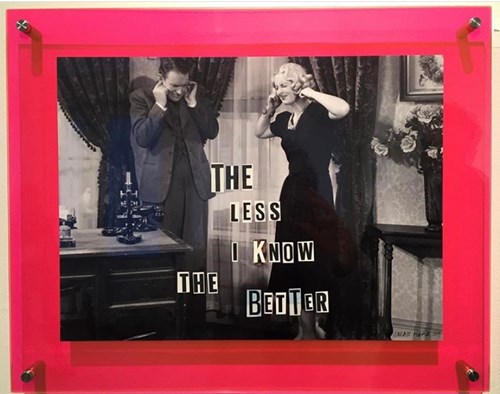 Sarah Maple, the award-winning visual artist who gained international recognition in 2007 after winning the Chanel 4 New Sensations award for emerging artists with the Saatchi Gallery, is normally extremely vocal in her views.

However, her controversial and often mischievous artwork (see hijab self-portrait series that includes smoking and cuddling a pig), has been put to the side in this silent protest as the artist expresses her frustration at the current political climate. 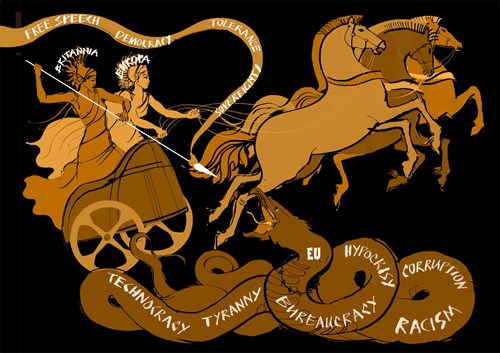 Lot 15. Jan Bowman
Allegory of Sovereignty
Signed and numbered (lower edge)
Archival print on paper
29.7 x 42 cm.
Created in 2018
This work is from an series of 50 unique prints.

Jan Bowman is an architect-trained author and illustrator. A founding member of Brexit Creatives, she was inspired by the ideas of Ancient Greece and Greek imagery to draw this reflection on the Brexit debate.

The artist depicts the EU as a dragon representing tyranny, technocracy, corruption and racism. But the monster is being trampled by Britannia and Europa, who carry banners declaring the values of tolerance, democracy, free speech and sovereignty. The work is a commentary on today’s battle of ideas.

Jan Bowman's story-telling is grounded in her appreciation for humanity and democracy, and inspired by her love of cities, gardens, and songs about 21st-century angst.

Jan Bowman is an architect-trained author and illustrator. A founding member of Brexit Creatives, she was inspired by the ideas of Ancient Greece and Greek imagery to draw this reflection on the Brexit debate. 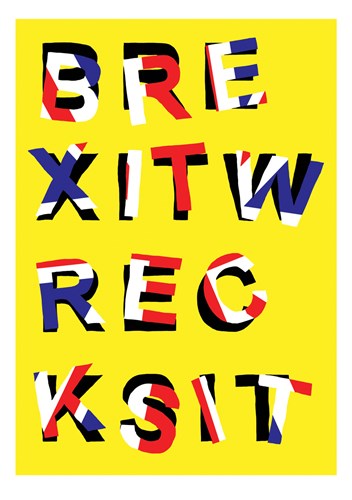 Lot 16. Oli Fowler
BREXITWRECKSIT
Signed and numbered (lower edge)
screen print on paper
70.7 x 50 cm.
Created in 2019
This work is from a limited edition of 15.

The East London printmaker and tutor Oli Fowler, airs his views on the plight of Brexit for the UK as debate on the topic continued to ravaged through politics in 2019.

In his iconic bright screenprinting style, he spells his message clear and bold in fragments of a broken Union Jack. 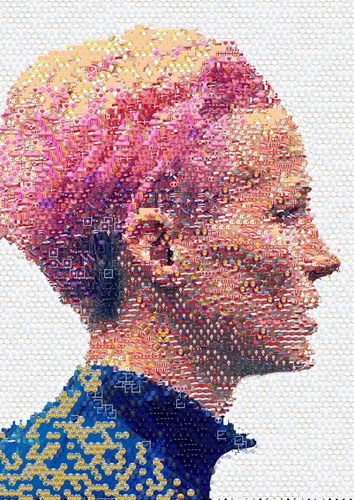 Lot 17. Camila Gonzalez Corea
Megan Rapinoe
Signed and dated (on the reverse)
C-Type print on Supergloss paper mounted on Dibond
71 x 60 cm.
Created in 2019
This artwork is number 15 from an edition of 15.

Camila Gonzalez Corea uses her unique and highly innovative working method to create a portrait of the USA football striker, Megan Rapinoe, made entirely from emojis.

With the 2019 FIFA Women's World Cup being the most watched in history, Megan Rapinoe took the opportunity to voice her opinion against the US President Donald Trump and female inequality. She vowed to fight for equal pay in her industry and to be a voice for the LGBTQ community.

I can say from personal experience that this does not come easy, this is something I did not have. You constantly see football idols for boys, not to girls. I went from training five hours a day to zero, not because I wanted to, but because I did not see a future in it as a woman. Let’s not let this happen to anyone else." 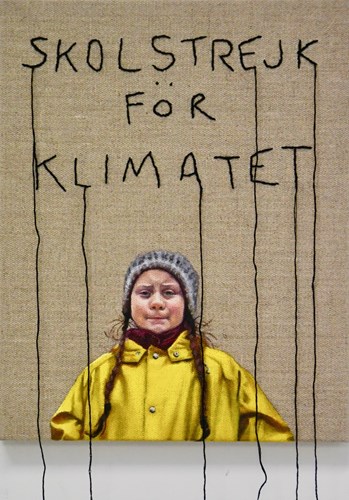 Julia Hall is no stranger to documentary painting. At the beginning of 2018, the artist started her If Not Now series which saw her create a painting every week for a year that reflected the news stories of the time. It was created in response to the frenetic media onslaught in contemporary society - the slow, rigorous layering of oil paint gave longevity to otherwise fleeting events.

For her tribute to 2019, Julia has created this oil painting portrait of Greta Thunberg, the Swedish environmental activist. In May of this year, Greta was featured on the cover of Time magazine, which named her a "next generation leader" for her work on climate change. 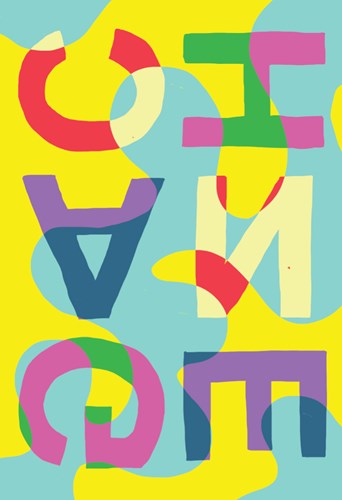 This energetic screen print is Oli Fowler's second response to the ever-changing political landscape of the UK.

A swirling and spirited pattern acts as camouflage to the letters on the page, therein becoming a symbol of governmental and political change that the artist believes can happen without the knowledge of the people it will affect. 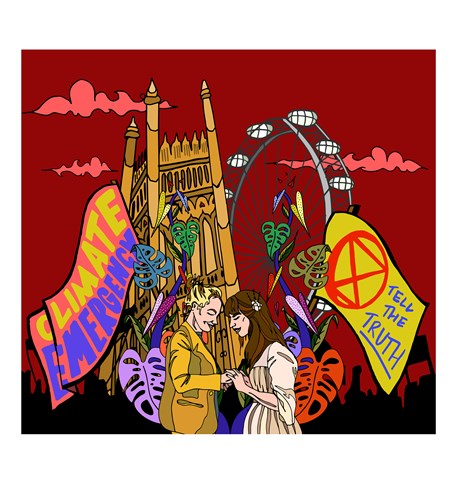 Lot 20. Molly Hankinson
We Rebel for Their Future, They Rebel for Yours

Signed and editioned
Giclée Print on Hahnemule Photo Rag Paper.
42 x 46 cm.
Created in November 2019
This print is 1 of 3 in a limited edition of 3.

The title of this second work by Molly Hankinson in History in the Making is a direct quote from Extinction Rebellion’s response to a wedding ceremony of a queer couple that took place amongst their protest on Westminster Bridge on the 7th October this year.

As well as celebrating free love and giving visibility to queer voices, the contextual message of their marriage is clear: Fight now if you want a future, and fight now for the future of others.

The work was created using a combination of hand-drawn and digital illustration techniques, this
work exists solely as a giclée print as its original and only medium. 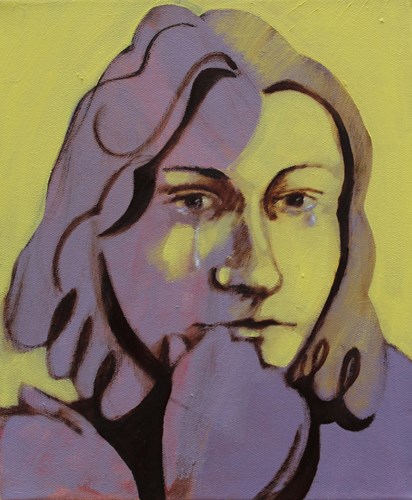 This pensive and emotional portrait is a reflection on the climate emergency of 2019 and was painted in the Cornish countryside by the UK artist Nettle Grellier.

Simply constructed with a limited colour range, the figure in Nettle's painting appears as an allegory for nature or the environment. Whilst the title's play on words adds an element of black humour to an otherwise world-threatening situation. 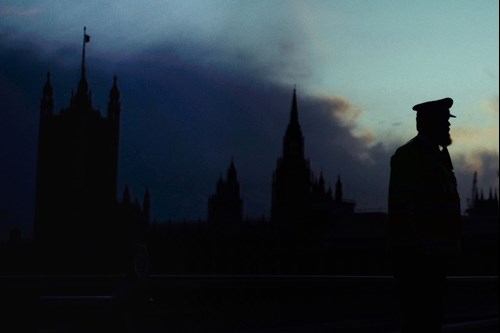 Lot 22. Sam Collins
Westminster Bridge
Signed, numbered and dated (on the reverse)
Giclee print on Platinum Baryta paper
29.7 x 42 cm
Created in 2019
This work is number 1 from an edition of 10.

You can see all of the artwork in The Christmas Auction here.