By The Auction Collective

Tina Crawford, you are an incredibly talented fine art embroiderer with an amazing ability to capture a figure, place or feeling in your with your rapid sewing. Grayson Perry has one of your works, Paul Smith sings your praises and your line of fine china and glassware, inspired by your embroidery, has a place at the London Museum, Soane Museum as well as having notable success with major retailers such John Lewis and House of Fraser - it is clear that your 'free embroidery' is loved by a lot of people. We are so lucky that you are including two works in the PAPER | SCISSORS | STONE auction on 8 November, thank you.

But can you tell us first what is 'free embroidery' and what attracted you to the medium?

That’s very kind thank you! Free embroidery is pretty much backwards drawing. Because you’re moving the paper or fabric rather than the ‘pen’ - the needle of the machine is my tool and feels like an extension of my arm. I took to it seamlessly (no pun intended). It’s easier for me to write with the machine than with a pen now.

What is your process when creating these works, how do you approach a blank piece of material?

I never draw or mark first, it’s needle in and off I go, mistakes happen but I embrace them – a bit like life. Nothing’s perfect!

What are the biggest challenges when working with embroidery?

Scale, because I don’t mark or draw it means scale and placement are a challenge but I quite like that.

Some of our readers might be new to the medium, is it an easy object to live with? How should they display it?

Most of my work up to now has been framed behind glass, but I’ve had customers that want to touch it so I’m making more pieces that are either just hung or framed with no glass. The finishing is 50% of the piece so I take it quite seriously, it can make or break a piece. The great thing about my work is clients really do see new things each time they look. 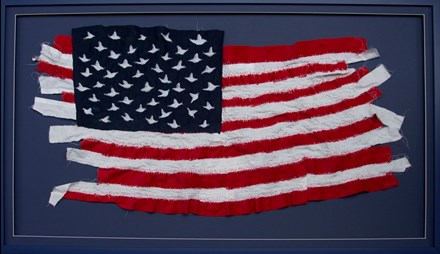 One of your artworks in the auction is the flag Bird Crap. It is a very unique object with lots of interesting details that the viewer might not initially see, can you describe the work to our readers?

Bird Crap came about from seeing Donald Trump's social media feed, he and the situation around him is a fountain of inspiration. The falling apart Stars and Stripes flag has lines of text which are direct from his Twitter feed, it also has ‘fake news’ stitched white on white throughout. The stars are small birds (referenced in the title) - not the Twitter bird itself though! The placement of the piece resembles the shape of America too and anything else you see in it is your own! 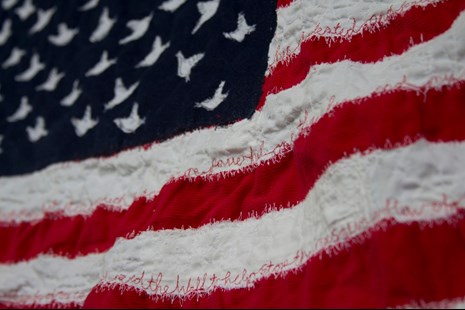 So there really is a lot going on in the work. We can see that the two tweets mentioned are the famous: "I too have a Nuclear button, but it is much a bigger & more powerful one than his" and the "We need a wall" tweet. Why did you create this work?

It’s really different to pieces I’ve created in the past but it seemed like such an obvious idea. I initially wanted to create a falling apart flag because of the state of the country, but it needed more and I felt Trump's Tweets had to be immortalised, it’s the start of my Bayeux tapestry! 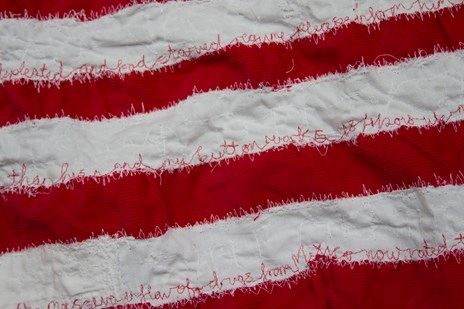 Does politics influence much of your work and are there any other sources that affect your creativity?

I’m influenced by everything. At the moment my work is all related to my health, I didn’t plan it that way, it just happened. The current state of affairs will always be a source of inspiration for artists I think but I don’t consciously go that way.

What is next with your work?

I’m creating more sculpture pieces which is exciting - larger in scale and using very different materials. I’m stitching a piece out of used crisp packets and chocolate wrappers currently that is about eating disorders, the piece is called Comfort Blanket.

Very interesting indeed, and finally, how can the readers stay up to date with what you are up to?