Rayvenn D'Clark is an MA graduate of Chelsea College of Art and Design, the Junior Editor for Shades of Noir, a multimedia sculptor and a portraitist exploring techniques in lifecasting, prosthetics and new technologies such as VFX and 3D printing.

Rayvenn, we are thrilled to include one of your sculptures in the Abstract: Reality Auction. Lot 24, I Don’t See In Colour, is a fascinating work and so beautiful. Thank you for taking part.

So before we get started, can you tell us a bit more about I Don’t See In Colour?

In making such work I feel it is important to be engaged within the process of keeping black figures at the forefront of our consciousness. In my work the image of the black body becomes lasting and impermeable by being sculptured into objects, extending the practice of manifesting black bodies into less traditional mediums. It begs the question what the body politić is moving towards in the present.

The work itself presents the praxis between objects modelling the real, and the ability to usurp the 'original' as self-sustaining fictions; of past and present. The print stands smaller than life size, a proportional mirroring of the sitter - or an ode to...

Made from white Nylon plaster, the textual surface of the print contains minute, very beautifully fluid lines and machine-enabled tresses in the object's form. This is the resulting feel from fabrication of this object using computer processes.

Colour is removed from the object; a more objective attempt to discuss issues of blackness, race, hyper-visibility vs invisibility, absent of the visual cues of black bodies which remains a loaded symbol in the present question: ‘What is Black in Visual Culture...?’

Where did the idea for making this work come from?

I would describe my practice as the (literal) act of elevation; a political act.

To abstract any section of the body becomes a political act; my practice (re)articulates the black body which is laid bare - in traction, unencumbered. It is in this duality that a strict contextual change occurs - where the human anatomy is reinterpreted and transformed, redefining the black aesthetic towards a more positive – heroic even – portrayal of black people(s).

Within this work the insatiability of self-referential questioning presents a welcome opportunity to break free from reference once and for all. In doing so I am shifting expectations of the formal arrangement - of visualisation/ manifestation/ transmission of black figures - via figuration. Questioning traditional self-representational practices becomes a way to immortalise the black body in all of its sublime, multifaceted complexity and beauty.

In taking black figures and reconfiguring the narrative by producing portraits full of stylised power, using mixed-media methods and materials, I explore what it means to repurpose the lens of whiteness on black figures, no longer subjugating them to positions of inadequacy. It becomes a fundamentally ideological position of framing.

In experimenting with (material) format, we can understand aspects of the ‘self’ in a very different way: of inherent strength and endurance in the face of adversity.

Coining the term body ‘politić’ – in a larger discussion of the irregular position of black bodies collectively – such work exposes the black body laid bare - in traction, unencumbered; motivated by issues inherent to the diaspora, including invisibility versus hyper-visibility. 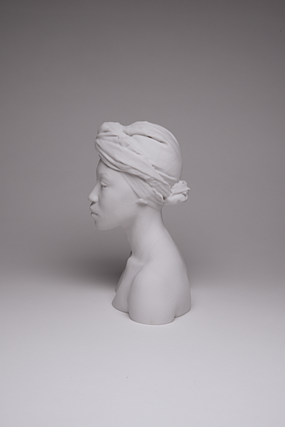 Can you tell us about your process, how is this work created?

The piece explores the outer limits of the virtual platform afforded by the internet and digital technologies. Utilising digital manipulation tools - such as 3D Scanning, afterwards employing several kinds of manipulation software and ending with printing - as a sculptural tool, it is an amalgamation of traditional methods of building and sculpting objects using, in part, online tools to build a piece such as this over the course of a few months.

It is this duality – visually abstracted from its normative function - that surrounds the sculpture, shifting expectations of the formal arrangement of figuration by questioning traditional self-representational practices.

Who is the sitter for your sculpture?

Friend. Collaborator. Activist. Artist. HIV/AIDS Campaigner Horcelie Sinda Wa Mbongo - organiser/founder of Lobiko ya Congo, which aids healing and centres around education in the Congolese diaspora: https://www.gofundme.com/4kah5-trip-to-congo - and I have been collaborating since we met on our Foundation Degree at Central Saint Martins in 2013/14. Very much my model muse and a source of inspiration in my professional career, she has undeniably been invaluable to my growing body of work by allowing me to test various analogue and digital processes in building sculptural objects throughout my artistic career. 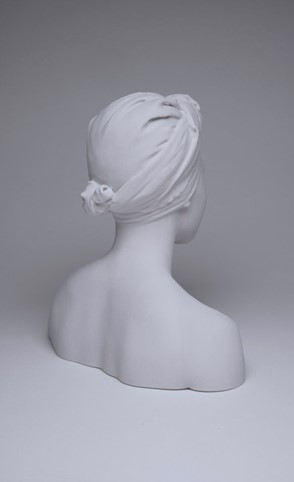 Is working in a hyper-realist way integral to your work’s meaning and reception?

The decision behind what material format/visual manifestation my work takes depends on desired outcomes; ‘what is it that I am trying to communicate?’ ‘Who is my audience?’ I'm attempting to recondition stereotypes and mediated reflections of the black body (politić) within the duality of invisibility and hyper-visibility of the digital where it resides/thrives (via memes, popular culture etc.). The work borrows from a modern methodological phenomenon exposing Fine Art fusions alongside VFX techniques and digital rendering/manipulation, in order to create somewhat otherworldly visualisations - cultivating levels of visual and aesthetic hyperrealism - with emphasis on material constructs.

Hyperrealism remains a key critical interest. I deal explicitly with figuration, abstracted only after materialisation, and as such I remain interested in the capturing and recreating hypperalist outcomes.

As a former photographer/painter-drawer, hyperrealism and/or visual detail is a way of seeing that greatly informs my evolving practice as I construct my sculptures. More specifically is the work's critical and vital relationship with space in its pursuit of ‘presence’. This has seen my work becoming embedded in the everyday, collective experience; presenting recognisable objects that become smaller parts of a larger installations that are explicit in their political undertones and personal narrative commentary, whilst polarised by their more covert, playful and subtle methods of installation and display.

The praxis between the past and the present, where intersecting identities (individual versus collective) come together within my oeuvre in my self-exploring the inherited legacy of trauma and history, ultimately reconstructing the narrative of race within narrative history that departs from cultural traditions with misconceptions and distortions of the truth.

I attempt to present black bodies abstracted from bias, everyday externalisations and race-based gendered stereotypes. Hence, my practices similarly inform each other in engendering the unique narrative history and theoretical influence of each new piece of work.

When new technologies come around they often ignite a new field of creativity in other areas. For instance the invention of the camera saw artists making abstract work, since there was less reason to paint in a realistic, representational way. Simultaneously once the portable camera was developed, it opened the doors for more people to become photographic artists.

3D printing and technologies most definitely present newfound opportunities to reconsider what sculpture is, and interrogate the process we traditionally use to create/build 3D structures.

It embodies this tempestuous dividing line between the handmade and digital, but I don’t think that it is a case of replacement. New formats get absorbed into the market - for example camera and film - and whilst our interaction with the former will change/evolve, it it not always a case of loss; it becomes a new challenge to foster a new relationship with the handmade, essentially ‘craft’, finding ways to create a space for both to exist. In many ways, it becomes a renaissance for what is considered the ‘traditional’, which prompts further innovation.

In making my casts I still remain very concerned with the handmade manipulations that cannot be communicate via the digital, and in turn what this represents in my own craft. I don’t think that I will feel the need to have to entirely filter out the handmade, which becomes a symbol of physical possession; an aesthetic that bears the marks of all the manipulations the work has been subject to through its lifespan, demonstrating the continuing flux between the handmade ‘original’ and the artificial ‘copy’.

Of course a benefit of a fluid, material-based practice is the openness from which I can continue to learn about a myriad of material formats that can inform my practice.
There is no limit to that which I can conceive, and ultimately manifest, as I train myself to become proficient in a number of different processes.

Your work reminds us of Kara Walker, in particular her monumental sugar sphinx sculpture, A Subtlety, or the Marvellous Sugar Baby. Are there artists who have influenced your subject matter or way of working?

That is a huge compliment as I have always enjoyed Kara Walker’s work and the themes she explores. They are so many artists who I take inspiration from, but more than rehearsing many of the greats I grew up researching, I feel that I take huge inspiration and creative energies from my contemporaries which I am maturing alongside who suffer similar challenges in making work within this particular political/economic climate, and alongside the influx of creative possibility in making.

As a multimedia artist I borrow from theoretical discourse which allows me to think differently about ways of making/communication in various formats: from film and poetry to literature and music. I take from the examples of the thematic work of Nona Faustine, Alexandra Bell, Childish Gambino (This is America, 2018), Thelma Goldin, W E B Du Bois (Double Consciousness), Frantz Fanon, Triple consciousness (Henry, 2013), Jordan Peele (Get Out, 2017) - this list is endless because the field of visual culture is a rich ecology of expression. In many ways these examples - and many more - appeal to different critical interests within an evolving working practice. 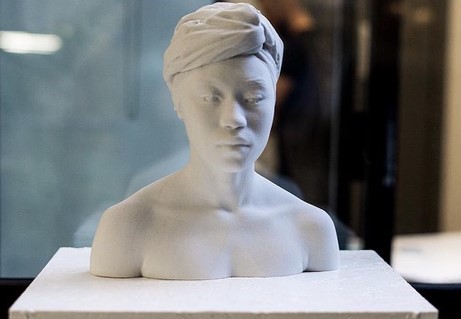 And are there any works in Abstract : Reality that speak to you, which one will you be bidding on?!

Artwork, of course, only appreciates in value, so why not!

Mum's the word, but there are some beautiful piece of affordable artwork that I may try my hand at bidding for.

Finally, what is next for you and how can our readers follow what you are up to?

2019 brings new and exciting challenges including Guest Curating a fabulous show at Nunnery Gallery titled Socio-Parasitology exploring positive parasite-host relationships/ecologies - in collaboration with Shades of Noir + Bow Arts from 10-20th January 2019 (incl. Workshops + Panel Discussions, PV: 10th) Similarly, I have a few speaking engagements and many more exciting plans that I cannot go into detail about but should really push my professional-creative practice. I will of course be making new work - hopefully on a larger scale - as part of an anthology of figures, as well as collaborating with some hugely talented up and coming artists.