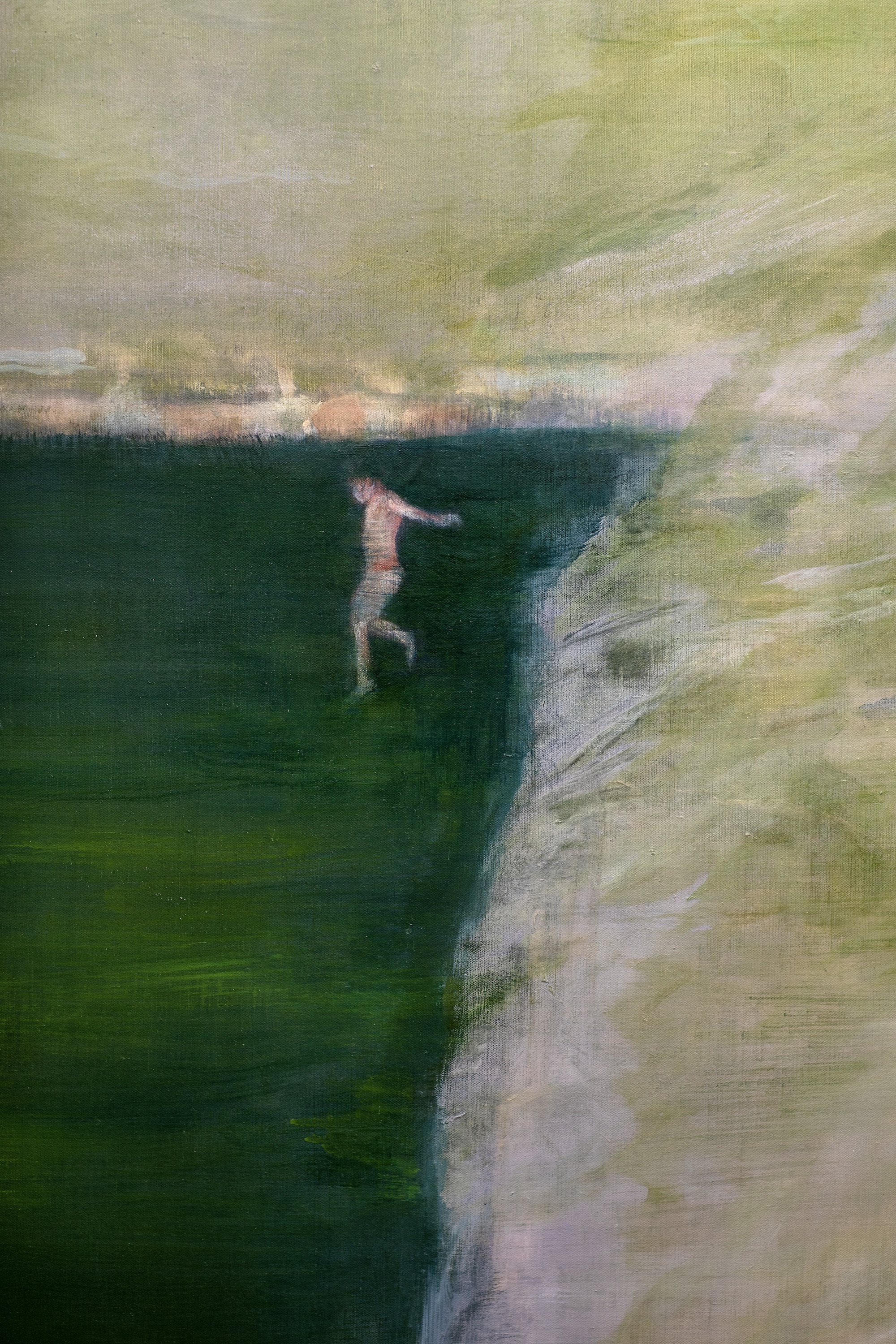 This work was inspired by a photograph that I took one summer of my nephew, Truman, jumping from the rocky edge of a quarry into a dark pool of water below. The quarry, located in a wooded, rural area of Southern Massachusetts, is a place of refuge in the summer from the baking heat. I took a series of consecutive photographs that show him running to the edge and then jumping off. The one that struck me most and inspired this painting, captures him in mid-air, one single moment in which his body, is still and strikes an elegant and delicate pose, as if he is floating or just testing the air with his one foot. The image of this single moment was in such contrast to the ones I took leading up to the jump – those in which he is charging with fierce determination to the rocky edge and seconds later submerged under water. It is the mysterious nature of the setting, the daring action and the unusual and graceful pose that struck me as something extraordinary, a split second, captured in the everyday.

Interestingly, I completed the Quarry painting during this past summer in the same general area, where again the heat of summer could sometimes feel relentless. Perhaps the painting was not only a way for me to translate through paint an extraordinary moment in time but also a way of transporting myself back into the cool air of the quarry woods.

Christina Dobbs’ work relates to the fragile nature of our day-to-day existence; one that is constantly shifting and vulnerable to change. With the camera as her sketchbook, she captures fleeting moments of the everyday which she feels, though seemingly ordinary, have the potential to become eerily extraordinary when reimagined through painting. The process of making involves the creation and subtraction of layers of paint. Through this, the source material from which she works is transformed adding elements of uncertainty and ambiguity to the everyday scenes she depicts. The figures in her paintings appear to be lost in the own worlds. Occupying a liminal and dreamlike space. The chosen settings recall leisurely summer days and generally open-ended time and space and have the potential to evoke a sense of nostalgia and reverie in the viewer. While these scenes may be familiar, they are also treated in a manner that suggests a strange and haunted undercurrent. This element of unease can destabilize our in initial impression of the scene suggesting that what we know in one moment can be undone in the next.

Films
“Nothing is Stable: a portrait of Christina Dobbs on Film” made by Greg Bushell and presented by MAMA Art.