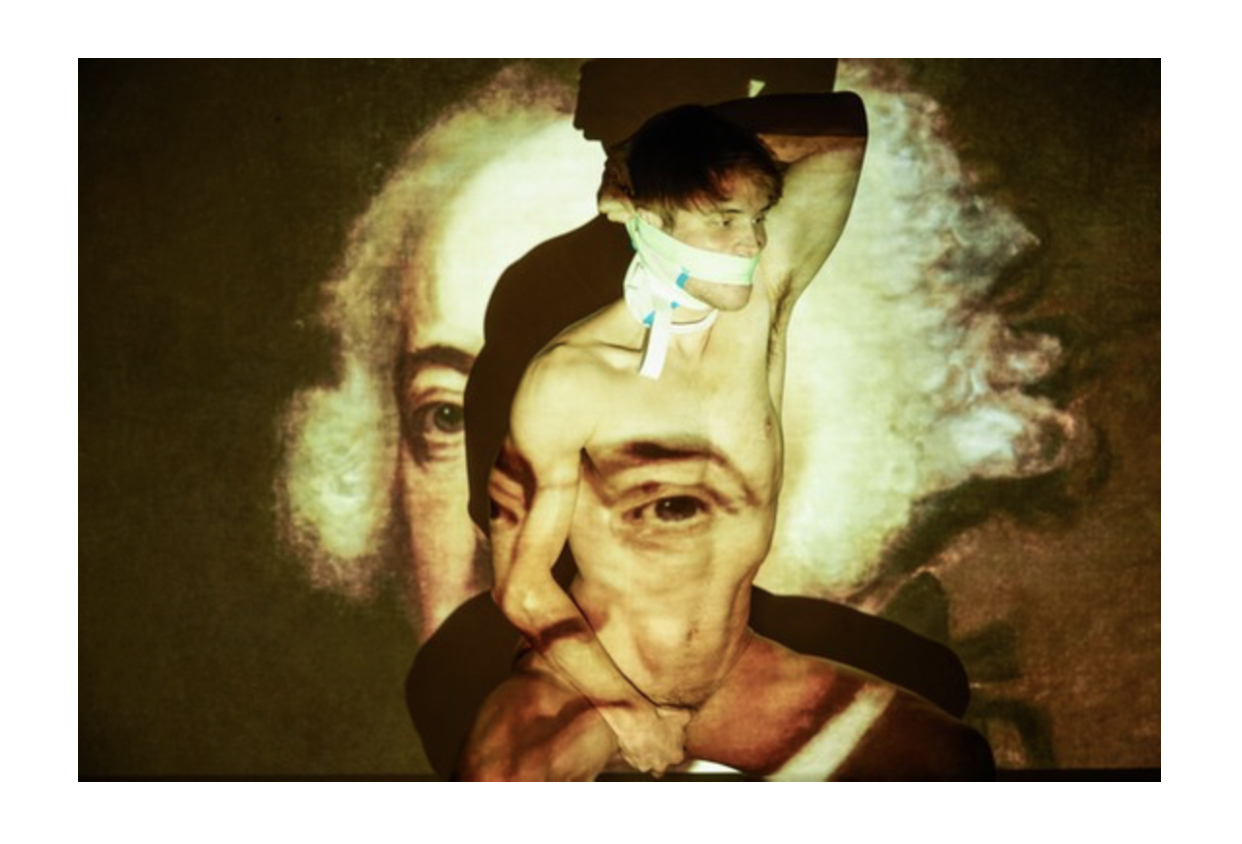 “John Adams” from White on White

"I am exploring what it means to be seen as something you hate, and the duality it creates in the psyche with the series White on White.
White male privilege or Whiteness as being a construct that is inherently invested in racism… I’m only beginning to understand the scope of my white privilege. I have always had friends, lovers, and sexual partners that were POC (people of color) so I felt I was the opposite of racist. I bought into the neoliberal idea that I did not see race. I was in this ambiguous region somewhere between ignorance and gay apathy. At some point, I decided to become more observant of people’s behavior, and more specifically, the contrast of how people treated me vs. people of color I know. I saw just how much less policed I am and how much greater access I have to opportunities, all because I have white skin."

“I wanted to project infamous white male leaders onto my body, and seek out grandiose paintings of them — to me, if they had that kind of painting made of themselves, they were subscribing to their own narcissism and relationship with power (the monarchical tradition). I knew that the portraits would then distort as they wrapped around my body, but the result was surprising. I started to really play with this amalgamation of my body and their faces and what it meant for their eyes, nose, and mouth to touch my penis, my butt, my naked body. For a moment I could try and imagine what it felt like to have the power these men had."

“The projection of the powerful white man onto my skin acts as not exactly a metaphor, but as a signifier to my inability to shed my skin. No matter how much I can change within, I will always be a visual representation of whiteness. I am naked often in my work, but I don’t consider that being vulnerable. A lot of the time I feel I’m using my nakedness as a symbol of power. In this series, I chose to connect with a more submissive side of myself by performing poses where I felt exposed and unprotected — positioned to give away control. In order to understand the abundance of privilege that I hold, I needed to form a union (via their — white cis men of historical power — image projected onto my body) with the toxic masculine oppressive white supremacy that I abhor. I had to sit with my own resentment of that dominant archetype (straight white masculinity) as a white gay male, and my pathway was through sexual exploration. I needed to get fucked, and I had to be the bottom.”

Baz Here is a queer fine art photographer (bazherephoto.com) and musician (bazheremusic.com) living in downtown Los Angeles (DTLA). A multidisciplinary artist, Here is interested in the sound current and its effect on visual aesthetics. Through the use of self-portraiture, his work questions perceptions about race (white privilege specifically – White on White) and queer identity politics. Raised in the Christian faith, he also explores themes of sex and sexuality (The Temptation of St. Baz and Tender Feelings) and their relationship to religious iconography, replacing saints and saviors with symbols of gay sex culture. His social media experiment #instaho challenges stereotypes in the gay community on Instagram surrounding the fit body and its relationship to intelligence. His work has been exhibited at The Hive, Featured Resident Artist (DTLA) / The Getty Center, Pop-up Gallery (Los Angeles) / Out There, Gallery 825 (West Hollywood) / Gallerie Sparta (West Hollywood) / LACDA (DTLA) / Gay Downtown LA Artwalk Pop-up Gallery (DTLA) / Beyond Baroque (Venice) / Art Share LA Fall (DTLA) / Los Angeles LGBT Center Advocate and Gochis Galleries (West Hollywood). He was also featured in The Advocate and The Cultural Weekly. Baz received his Bachelor of Fine Arts at the Photo Arts Conservatory at the New York Film Academy in Burbank, CA, where he is also finishing his MFA and teaching part-time. Baz lives with his partner and 3 dogs, England, Gia, and Kratos and prides himself on his mashed-potato making prowess.