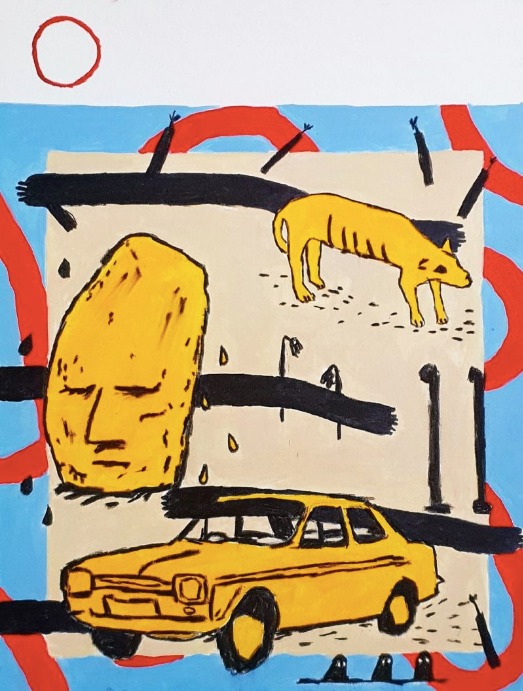 An autobiographical painting by the award-winning Welsh artist Billy Bagilhole.

"This piece was created shortly after I had a switch in style and I starting taking very graphic elements from my paintings and simplifying them. The narrative in the work became clearer and people found it easier to digest the motives behind the work."

Titled La bamba, from the Mexican 'To stomp', this artwork is a statement for the new wave of imagery and ideas Billy had coming. The painting includes motifs frequently used by the artist - abandoned cars, a lost dog and a stone head. All these elements come together to create a collaborative narrative of their own.

"For me this piece signifies a few different parts of my own life, they all have their own significance but when brought together they create a new story, this is for the viewer to decant and decide."

Billy Bagilhole grew up in a household full of his father’s paintings and prints, from a young age drawing Native Americans, animals, religious figures imitating those images created by his father upon the walls. They continue to be a fascination as his father passed away when he was 6 in the year of 2001. Estimate:£600 - 900
Be the first to hear about available artwork Sign up to the newsletter